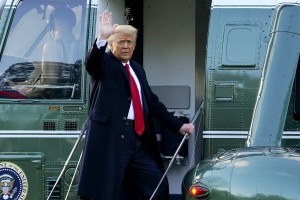 FILE – In this Wednesday, Jan. 20, 2021, file photo, Donald Trump waves as he boards Marine One on the South Lawn of the White House, in Washington, en route to his Mar-a-Lago Florida Resort. (AP Photo/Alex Brandon, File)

WASHINGTON (AP) — Donald Trump has named two lawyers to his impeachment defense team, one day after it was revealed that the former president had parted ways with an earlier set of attorneys. The two lawyers representing him will be an Alabama attorney, David Schoen, and a former prosecutor in Pennsylvania, Bruce Castor. Several South Carolina lawyers who were set to represent Trump at the trial starting next week have left the team. Trump is the first president in American history to be impeached twice. He is set to stand trial in the Senate on a charge that he incited his supporters to storm Congress on Jan. 6.