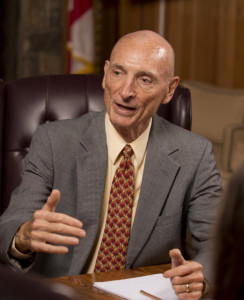 Holmes says today’s ‘cancel culture’ is erasing any mention of history and historical features that they find offensive, painful, or in conflict with their personal political beliefs. He says that the only way to determine where the state is going is to remember where the state been. 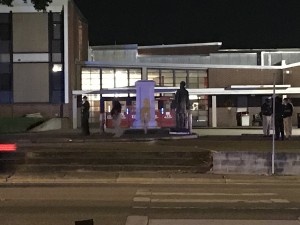 Under the provisions of Holmes’s legislation, no historical monument or memorial located on public property may be “relocated, removed, altered, renamed, dishonored, disparaged, or reinterpreted with competing signage, wording, symbols, objects, or other types of communication.

The bill would also strengthen the requirements that governments and other entities must meet in order to seek a waiver from the Committee on Alabama Monument Protection.

Each elected or appointed official who violates or votes in favor of violating provisions in the “Memorial Preservation Act of 2021” would be fined $10,000 a day for each day the violation continues until restorative action is taken. 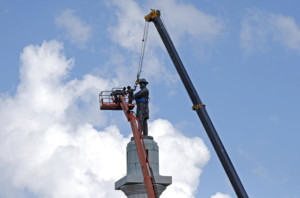 Workers prepare to take down the statue of former Confederate general Robert E. Lee, which stands over 100 feet tall, in Lee Circle in New Orleans, Friday, May 19, 2017. (AP Photo/Gerald Herbert)

Constitutionally-created boards of trustees would be specifically required to comply with the Act, according to the bill’s text.