Get Ready for Super Bowl LV on CBS 8! 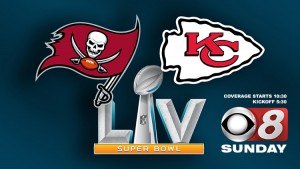 Super Bowl LV will be on CBS 8!  This year’s game features the Kansas City Chiefs taking on the Tampa Bay Buccaneers at Raymond James Stadium in Tampa, Florida. This makes the Super Bowl a home game for the Bucs.

The big storyline for the game is the quarterback matchup between the Chiefs’ Patrick Mahomes and the Bucs’ Tom Brady. Brady, 43, is going for his seventh Super Bowl title. It would be his first in Tampa Bay after leaving the New England Patriots. Mahomes, 25, is looking for his second consecutive Super Bowl victory.

On Super Bowl Sunday, you’ll find plenty of pre-game coverage on CBS 8. It starts at 10:30 and runs all the way until kickoff at 5:30. Then after The Equalizer at 9, stick around for highlights and post-game coverage on Alabama News Network at 10. 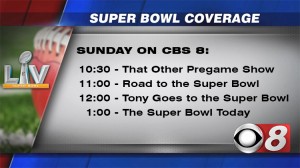 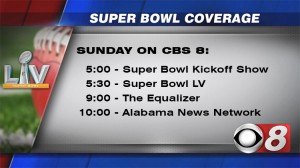