No. 18 Missouri holds off frantic rally, tops No. 10 Alabama

COLUMBIA, Mo. (AP) — Dru Smith and No. 18 Missouri built a 22-point lead in the second half, then held off a frantic rally by No. 10 Alabama for a 68-65 victory. The Tigers held their largest lead with 13:05 left and were still up by 20 with less than six minutes remaining. Herb Jones had two chances to give Alabama the lead in the final 20 seconds, but he missed a layup and had another try blocked by Mitchell Smith. Missouri is 13-3. Alabama lost for the first time in SEC play and fell to 15-5 overall. 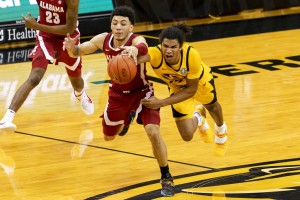