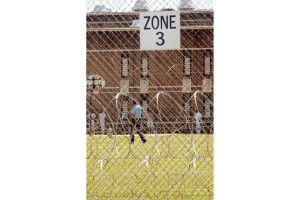 MONTGOMERY, Ala. (AP) — Three Alabama correctional officers are on leave as the FBI helps to investigate a prison altercation that hospitalized two officers and two inmates, including a well-known prison rights activist, the state prison system said Monday.

The Alabama Department of Corrections said the incident occurred between staff and inmates at William E. Donaldson Correctional Facility in Bessemer on Jan. 30. The two officers suffered stab wounds and Robert Earl Council and Ephan Moore, both inmates at the prison, were taken to hospitals for treatment of their injuries, the prison system said.

Council, sometimes known as Kinetic Justice, is a prison rights activist who has been involved with prison strikes and other organizational efforts. He is serving life without parole for murder.

The U.S. Department of Justice is waging an ongoing lawsuit against Alabama, alleging that state inmates are subjected to unconstitutional levels of violence from both inmate-on-inmate assaults and a pattern of excessive force. The state has denied the federal accusation.

The department said it could not release further information until the investigation is complete. The prison system said Council was taken to a hospital but is now back in prison custody.

Catrice Britt, Council’s niece, said her uncle was trying to intervene in an altercation between guards and Moore.

“Robert Earl stepped in to help the guy. … He is in a lot of pain. He has stitches in his head, broken ribs, eyes swollen shut,” Britt told The Associated Press.

Videos circulated on social media that the poster said were shot in the aftermath of the violence. The recordings appeared to show a large amount of blood on the prison floor and inmates coughing from lingering pepper spray, or another chemical agent, in the air. An inmate says, “they jumped on Robert Earl.”

The prison system said it is investigating the death of an inmate found unresponsive in his cell.

David Lee Franklin, 31, was declared deceased by facility medical staff after being found in his cell Tuesday, prison officials said. Franklin was serving a 10-year sentence for possession of a controlled substance out of Jefferson County

Dewitt Searight, 77, died at a local hospital on Monday from an apparent ongoing medical issue, the prison system said. He was serving a life sentence without the possibility of parole for murder.