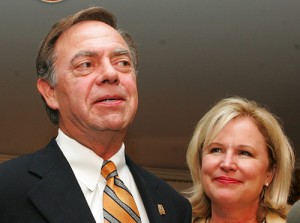 George Wallace, Jr. has issued a statement regarding UAB’s decision to remove his father’s name from a building on its campus in Birmingham. The decision was made by the UA System Board of Trustees.

The trustees unanimously approved a resolution saying that four-term Gov. George Wallace rose to power by defending racial separation and stoking racial animosity. While noting Wallace’s eventual renouncement of racist policies, the resolution says his name remains a symbol of racial injustice for many.

This is George Wallace, Jr.’s response:

“When my mother was being treated at Houston’s M.D. Anderson Hospital  for the cancer that would ultimately take her life in 1968, my parents often lamented that Alabamians had to travel so far to seek quality treatment.  Their conversations more than 50 years ago served as the genesis for the world-class cancer treatment and research being conducted at UAB today.

Likewise, upon leaving office in 1978, my father utilized his relationships with President Jimmy Carter, noted industrialists, and others to raise millions in funding for UAB, its programs, and its expansion.  He was passionate about ensuring that Alabama would have a world class research, treatment and educational facility in UAB, and his dream became a reality..

Former UAB Presidents Scotty McCallum and Richardson Hill often told me about his dedication to the university and the great value of his work on its behalf.

The basis upon which the university’s board made its decision reflects only one part of my father’s life journey.

Realizing mistakes he had made in the past, my father devoted decades of his life toward promoting understanding, healing, brotherhood, and a recognition of our common humanity.

Many see him only as a leader of the Old South, but, for most of his public life, he was an equally fervent leader of the New South who encouraged his supporters to embrace change, leave past customs behind, and unite together as Alabamians.  I have always felt, and always will, that his journey should serve as an inspiration to all of us, and his example of genuine change should be uplifted not denigrated.

The action by the UA board of trustees offers solid evidence that even a deeply conservative state like Alabama is not immune to the dangers of the present-day ‘cancel culture’ and its efforts to view complex history and individuals in the most simplistic, one-dimensional terms.

The UAB campus that stands today was built largely through the efforts and vision of Gov. George Wallace, and no amount of sign-changing on building edifices can erase that irrefutable fact.

Perhaps it would be proper for the board to consider passing an additional resolution recognizing my father’s role in making UAB a world-renowned institution and offering him its thanks.”

The building at UAB will now be called the Physical Education Building.