TUSCALOOSA, Ala. (AP) — Herbert Jones scored 17 of his career-high 21 points in the first half and No. 11 Alabama had a blistering shooting day in a 115-82 rout over Georgia. It was the most points Alabama has scored in an SEC game. Freshman Josh Primo scored 19 points, all after the half, for the Crimson Tide, which had five players score in double figures and reached a season high in points. Alabama came into the day with a 3-1/2-game lead in the league standings with four now remaining in the regular season. The Tide hit 18 of 30 3-pointers to fuel the easy win. Georgia freshman K.D. Johnson capped a big week with 24 points. 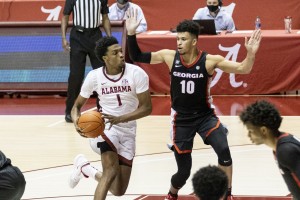 Alabama forward/guard Herbert Jones (1) runs by Georgia forward Toumani Camara (10) during the second half of an NCAA college basketball game on Saturday, Feb. 13, 2021, in Tuscaloosa, Ala. (AP Photo/Vasha Hunt)