A new aviation company is bringing more jet plane traffic to Craig Field in Selma — as well as about 30 new jobs.

City Jet/Turbine Worx is opening a dispatch facility and aircraft maintenance operation on the flight line out at Craig Field — in Hangar 251.

Ron Mays is the company’s founder and chief executive officer. 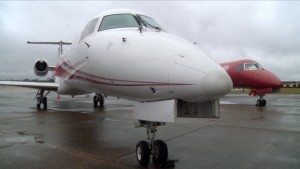 “We’ll be maintaining aircraft here for you know our own in-house aircraft and you know other companies as well,” said Mays.

“Aircraft mechanics are hard to come by and it gives the opportunity to train those people here in the future,” said Craig Executive Director Jim Corrigan.

“And that’s what will attract other companies. So, I think we’re opening a door for future expansion at Craig.”

City Jet/Turbine Worx is also an official sponsor of the Southwestern Athletic Conference. The company is under contract to fly SWAC athletic teams to their sporting events nationwide.

“The facilities here were just great for the size aircraft that we have,” said Mays.

“We have precision approaches out here. We got 60 acres of concrete out there to park. It’s out of every body’s way and we have room to grow.”

What the Tech? Toilet Paper Calculator Helps You Find the Best Deals