Central Florida is close to a deal to make former Auburn coach Gus Malzahn the Knights’ next head coach. A person with knowledge of the situation tells The Associated Press that UCF and Malzahn are finalizing an agreement that would bring him to the school a little more than two months after he was fired by Auburn. Malzahn was 68-35 in eight seasons with the Tigers.UCF lost both its athletic director and football coach to Tennessee last month. UCF hired Terry Mohajir as AD last week. Mohajir was the athletic director at Arkansas State during Malzahn’s one season at the Sun Belt school. UCF has been one of the top teams in the American Athletic Conference since joining the league in 2013. 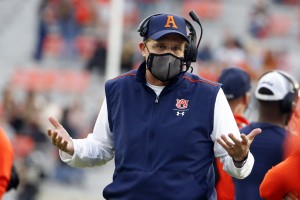 FILE – Auburn head coach Gus Malzahn reacts to a call during the second half of an NCAA college football game against LSU in Auburn, Ala., in this Saturday, Oct. 31, 2020, file photo. It’s been a whirlwind three weeks for Auburn, given longtime coach Gus Malzahn getting fired on Dec. 13, new coach Bryan Harsin being introduced 11 days later, several players opting out of the Citrus Bowl and the Tigers hurriedly trying to prepare for a showdown against a stout Northwestern defense. (AP Photo/Butch Dill, File)