City of Lanett Mayor Arrested, Charged with Using His Office for Personal Gain

Attorney General Steve Marshall announced the arrest of Jonathon Kyle McCoy, the mayor of Lanett. He was arrested on three felony charges. The charges were using his official position or office for personal gain. McCoy, 56, surrendered at the Chambers County Jail Tuesday morning, with a bond set at $30,000. 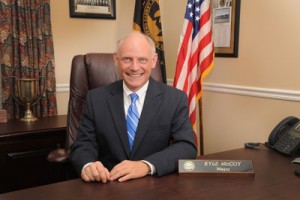 Specifically, the indictment charges McCoy with the following three counts:

If convicted, McCoy faces a maximum penalty of two to 20 years and a $30,000 fine for each of the three counts, which are class B felonies. Furthermore, Section 36-9-2 of the Code of Alabama states that when an officeholder is convicted of a felony, the office is vacated from the time of conviction.

No further information about the investigation or McCoy’s alleged crimes other than that stated in the indictment may be released at this time.

*An indictment is merely an accusation. The defendant is presumed innocent unless and until proven guilty.