Winter Weather Shuts Down Most of Selma and Dallas Co.

A blast of winter weather shut down schools — roads — along with city and county offices in Selma and Dallas County Tuesday. And now the area is bracing for another round of freezing temperatures.

Snow flurries — below freezing temperatures — and wind chills that make it feel even colder — aren’t something people in the Selma and Dallas County area are used to dealing with. 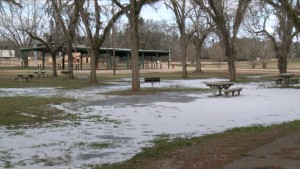 “We was up under a winter freeze warning. The temperatures was at a low 16 degrees,” said EMA Director Toya Stiles.

She said bridges and roads around the city and county have been sanded down — to make them safer for people to use.

“There may be some shaded areas that may have black ice. We just encourage citizens to drive with caution.”

Maureen Beard moved to Selma from Canada about two and a half years ago. So she’s still getting used to the way things shut down — because of winter weather in the South.

“It’s not funny but it’s weird to me because we still go to school in eight feet of snow in Canada. But I can see why they do it because they’re not used to it,” said Beard.

City and county offices will reopen for business Wednesday morning.

Roads are back open — but EMA officials are recommending that people stay off the roads if at all possible — especially overnight Tuesday.