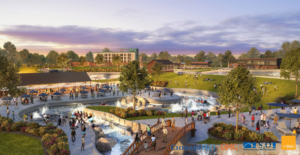 The deal centers around the Salvation Army building and land on Maxwell Boulevard, that’s where the proposed whitewater facility will be built.  Negotiations between the city and Salvation Army have been ongoing for more than a year now.

This multi-million dollar project was first announced in August of 2019 by the Montgomery County Commission.  It will include an Olympic-standard whitewater rafting facility and is expected to include other developments including restaurants, hotels and more.

City Council President Charles Jinright says city council passed a resolution Tuesday night allowing Mayor Reed to move forward with purchasing the property for $5 million.  The city would then donate the property to the Cooperative District, the group overseeing the whitewater project.

While this is a big step, it is not a done deal.  Jinright says they hope to have it finalized soon.  Cooperative District Chair Leslie Sanders says with this news they are working towards a groundbreaking for the Whitewater facility in May of this year.

Alabama News Network has also reached out to the Salvation Army and Mayor Reed’s office for more on this pending deal.