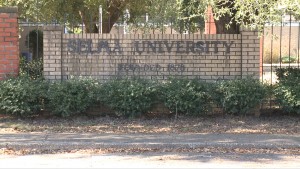 The new president at Selma University has resigned from the position — after serving less than a year on the job.

Eddie Hill Jr. only served about 8 months as president of Selma University — before resigning a week ago.

“He did a wonderful job as long as he was here,” Angion said.

“The decision was a personal decision and so I am not privvy to the exact reasons but I know that he gave his best while he was here.”

Hill took over as president of Selma U in the midst of ongoing financial troubles — that threatened to shut down the historically black private christian college.

The school is in debt to the Department of Education — to the tune of about $900,000 dollars.

“That debt was incurred because of paperwork being inadequate for students who received financial aid. And so that aid money had to be repaid to the department of education. And that’s how we ended up with the huge amount of debt.”

Angion says repaying the debt remains a top priority. He says a payment plan has been set up — and a capital campaign is in the works.

“The goal to eliminate the debts that we owe to the Department of Education. And with the help from friends and philanthropists and of course from all of those who are committed Alabama Baptists, we are working together to make sure that happens.”

Founded in 1878 — Selma University has been a part of the Selma community for 143 years.

And there have been no immediate plans announced — to search for a new president.