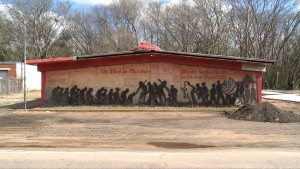 The annual Martin and Coretta King Unity Breakfast in Selma — will include a special feature this year — that will recognize four notable civil rights leaders.

It was announced last week — that this year — the Unity Breakfast — would be a drive-in event.

It’ll take place in the parking lot at Wallace Community College Selma — instead of the gym where it’s normally held.

Two large LED screens — and a small FM radio signal — will allow people to see and hear the event — from the safety of their cars.

“I think its very important this year the committee decided that we had to still have this breakfast regardless of the pandemic and all of the things that are going on,” said WCCS President Dr. James Mitchell.

Now organizers have announced that the breakfast — will also include a special tribute to four civil rights leaders who passed away last year.

First, the caravan will go from the college — to the Edmund Pettus Bridge — where a wreath will be laid. Then, it’ll proceed across the bridge — and conclude at the spot where the marchers met state troopers on Bloody Sunday.

“It’s where they stopped and the beatings started in 1965, said Faya Rose Toure. It’s a space, a sacred space that’s rarely honored. It was in this space where John Lewis and Hosea Williams said, “Let’s pray.” But before they could kneel and pray — that’s when the slaughter began. So we will go to that sacred space and we will have a special prayer there.”

The Martin and Coretta King Unity Breakfast — is set for Sunday, March 7th at 7:30 am.

There are free passes are available for foot soldiers who want to attend the event.