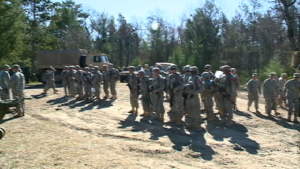 Lieutenant Governor Will Ainsworth joined with legislative leaders and military officers on Wednesday in order to highlight the importance of a package of bills that is designed to retain, protect, and improve the federal military presence and investment across Alabama.

The legislative package, which has already been approved by the State Senate, is the result of work by the Alabama Military Stability Commission, a panel that is chaired by Ainsworth and was created by state statute in 2011. The commission is comprised of several elected officials, cabinet members, and regional appointees from areas across the state with a heavy defense concentration.

“The federal military bases located in Alabama play an important role in our state’s economy and job climate, so retaining and, when possible, expanding their footprint must always be a top priority,” Ainsworth said. “And mayors in the cities and counties that house them will attest to how vital our military bases are in providing employment opportunities and revenues in local economies across the state.”

Among the bills in the package are measures that will allow military dependents attending public colleges and universities in Alabama to pay in-state tuition while stationed here, extend the enrollment deadline for military families to apply for magnet schools, guarantee the acceptance of out-of-state occupational licenses for military dependents in various professions, and others.

“The strong military presence in Alabama is important not only to our nation’s security, but also to our state’s economy. That is why this package of bills was one of the first the Senate took up and passed this session,” Reed said. “These bills show that supporting the thousands of service members and veterans across our state are a top priority of the legislature, and I appreciate Lieutenant Governor Ainsworth for all of his work and leadership in delivering this support to the military families who call Alabama home.”

House Speaker Mac McCutcheon, who participated in the news conference, recognized that competition among states for military infrastructure is at an all-time high.

“Even the smallest advantage we put in place can tip the balance of whether a base stays here, leaves here, or expands here, and the legislative package put forth by the Military Stability Commission signals that Alabama is serious about keeping and building upon our military bases,” McCutcheon said. “Offering items like in-state college tuition and additional job opportunities for military dependents not only makes Alabama more attractive to Pentagon decision-makers, it also demonstrates a needed measure of our state’s famous southern hospitality.

“Redstone Arsenal has been the backbone of the Tennessee Valley’s economy since its founding 80 years ago, in 1941, and that role is continuing to grow even more with the recent decision to locate U.S. Space Command at Redstone,” Butler said. “There’s no better way to roll out the red carpet for Space Command than by passing this legislative package and offering even more advantages and opportunities for the military personnel who will soon call Alabama home.” State Rep. Dickie Drake (R -Leeds), a military retiree with 42 years of service in the U.S. Air Force and Alabama National Guard, said he has firsthand knowledge that improving the quality of life for armed forces personnel and their families is a factor in determining where assets are
allocated.

“As a career serviceman, I can tell you that whenever a military family receives a new posting, the first thing they do is research the schools, the job market, and the quality of life in the city where they are being assigned,” Drake, who chairs the House Military and Veterans Affairs Committee said. “Dissatisfaction in any of these areas spreads quickly throughout the ranks, and it soon reaches the brass that makes the decisions at the top. Those are the folks who decide if military bases live or die.”

Other officials, including Montgomery Mayor Stephen Reed and Alabama National Guard Adjutant General Sheryl Gordon, also participated in the news conference that was held on the front steps of the Alabama State House.

Jazz in the Garden Held at Oak Park

One Man Arrested in Connection to Oakleigh Road Homicide