Carver-Montgomery Lady Wolverines Advance to the 6A Championship Game

Carver-Montgomery High School’s Wolverines fell Chelsea behind 10-8 after one quarter Monday at Bartow Arena in the AHSAA Class 6A girls’ state tournament semifinals, but the team didn’t panic. 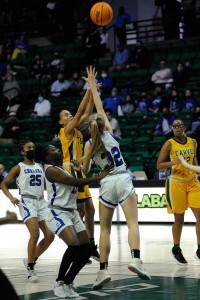 The Wolverines (16-4) turned up the defensive pressure and steadily took control forcing the game to be played at their faster pace and Carver advanced to Wednesday’s state finals with a 41-28 win.

Chelsea, coached by Jason Harlow, got seven points each from Mackenzie Titus and Sophia Brown. Point guard Sydney Schwallie had five points, four rebounds and five steals. The Hornets reached the state tourney for the first time in school history and also set a school record for wins (27).

All semifinal and championship games are being live-streamed over the NFHS Network by AHSAA TV partner WOTM TV. All of Monday’s games at UAB’s Bartow Arena and Bill Harris Arena are also being televised live over the AHSAA TV Network and broadcast live over the AHSAA Radio Network.