In the ultimate contrast in styles, Skyline played a full-court, run-and-gun style against a Linden squad built around getting the ball to 6-foot-6 sophomore Timya Thurman near the basket. 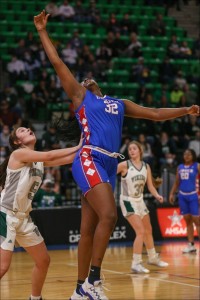 Skyline made 10-of-28 from 3-point range, including four each by Rowell and Bellomy. Linden, meanwhile didn’t make a 3-pointer.

Skyline, coached by Ronnie McCarver, advances to play Marion County (29-7) in Friday’s championship game, with tip-off set for 2 p.m., at Bill Harris Arena. Marion County defeated Samson in Tuesday’s other semifinal. Skyline also advanced to the title game in 2019 before falling to Phillips-Bear Creek, which was coached by Scott Veal, now the Marion County head coach.

Linden, coached by Teressa Bolden, fell one game shy of the Patriots’ first trip to the championship game since 2016.

All semifinal and championship games are being live-streamed over the NFHS Network by AHSAA TV partner WOTM TV. All of Tuesday’s games at UAB’s Bartow Arena and Bill Harris Arena are also being televised live over the AHSAA TV Network and broadcast live over the AHSAA Radio Network.