Anniston High School senior guard Malcolm Carlisle scored 28 points Thursday to lead the Bulldogs to a 54-52 victory over Booker T. Washington of Tuskegee. It was the school’s first state title under Coach Torry Brown’s watch and the school’s  first since 2009.

Carlisle had a steal and a 3-point basket in in the final second of the third period to turn what had been a two-point deficit five seconds earlier into a 41-38 lead heading into the final quarter. It was a big play at the time but no one knew just big it would be until the Golden Eagles’ last-ditch shot for a chance to tie or win bounced off the rim at the buzzer to give the Bulldogs (27-6) the win. 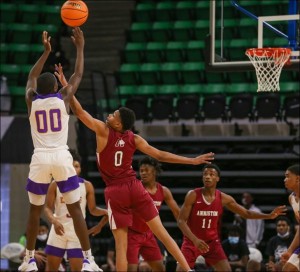 Booker T. Washington (19-5), coached by Corvin Johnson, trailed by seven 54-47 with 47 seconds remaining, but showed over the remaining seconds an incredible grit. Andrew Johnson sank a lay-up to cut the margin to five. Cameron Whitfield sank a free throw with 19 seconds left trimming Anniston’s lead to 54-50. Following his miss on the second try, Jeffrey Lewis rebounded and Joseph Phillips scored on a short jump three seconds later to cut the lead to two. Two more missed free throws by the Bulldogs set up the Golden Eagles’ last chance. Whitfield got off a good shot but it bounced off the rim at the buzzer.

Carlisle was 10-of-20 from the field, made three treys and was 5-of-8 from the free-throw line to account for his 28 points. The Class 4A state tourney MVP also had five steals and four rebounds. Elijah Myles had 10 points and seven rebounds for the Bulldogs and Antonio Kite added seven points, seven rebounds, four assists and three steals.

Whitfield and Lewis had 13 points each for BTW, Jalien Fluellen had 10 points and Johnson had six points, three assists and two steals. Phillips had a game-high nine rebounds.

The Class 5A girls’ finals between Birmingham Carver and Mae Jemison, was to tip off at 2 p.m., and the 5A boys’ championship closes out Thursday’s action with Ramsay taking on Lee-Huntsville at 4:30.

All championship games are being live-streamed over the NFHS Network by AHSAA TV partner WOTM TV and broadcast live over the AHSAA Radio Network.