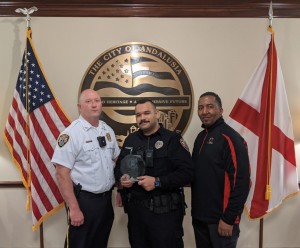 Central Alabama CrimeStoppers has awarded police officer Camron Ragland with the title of Andalusia Police Department’s 2020 CrimeStopper of the Year.

CrimeStoppers is recognizing 2020 Law Enforcement Officers of the Year through May 1. This recognition would have normally happened in January at its annual luncheon in downtown Montgomery. That luncheon was cancelled due to COVID-19 restrictions for crowd size.

Officer Ragland is a patrol officer.  He has been with the Andalusia Police Department for one year and has three years total law enforcement service.

“Officer Ragland responded to a call during Hurricane Sally and found a mother who had just given birth to a baby girl at her home who was unresponsive. Officer Ragland performed CPR and brought the baby girl back to life by the time paramedics arrived. He later visited them at the hospital, where both mother and baby were reported to be fine,” Andalusia Police Chief Paul Hudson said. 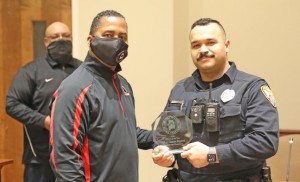