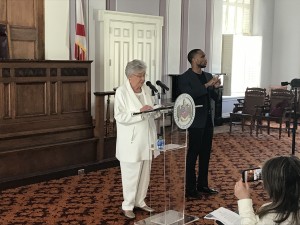 Gov. Kay Ivey announced at a press conference Thursday that she is extending the statewide mask order. The mask order that was set to expire on Friday is now being extended to April 9.

She made it clear that she will not keep the order in effect after April 9. This will be the last mask order extension. She says this extension is to allow businesses time to implement their own policies and make any adjustments they want ahead of April 9.

Ivey acknowledged that other states are ending their statewide mask mandates, such as Texas and Mississippi. But she says that she and State Health Officer Dr. Scott Harris want to get the state through the Easter holiday and allow more people to receive vaccinations.

While the mask order will remain in effect through April 9, there are some changes being made.

The following changes come with this Extended Safer at Home Order:

— In restaurants: the change would REMOVE the seating limit of eight at tables

— In hospitals and similar institutions: the change would raise from a maximum of one to a maximum of two caregivers permitted to accompany someone in a hospital at any one time or in a nursing home, subject to reasonable restrictions imposed because of the local COVID-19 situation and other factors