Will Virtual Jubilee Mean Loss of Revenue for Businesses in Selma?

The annual Bridge Crossing Jubilee typically draws tens of thousands of people to Selma each year.

They come — to commemorate Bloody Sunday — and the Selma to Montgomery marches — in the place where it happened.

Being in the crowd — and walking across the Edmund Pettus Bridge — gives people a sense that they’re a part of the history — and the movement.

But that likely won’t be the case this year — since large gatherings have been discouraged during the pandemic.

“Because even if people are congregating outside in large numbers, it’s too dangerous for us to risk the possibility of spreading COVID,” said Jubilee Principal Coordinator Drew Glover. 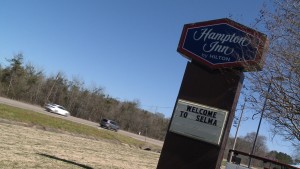 The Hampton Inn in Selma would normally be booked solid during the Jubilee — with people reserving rooms — a full year in advance.

“We’re a little over half full. We had a number of folks who had arranged for groups and blocks — and they cancelled them.”

General Manager Stan Creswell says the change to virtual has impacted the hotel — but not much.

“Bout 10 percent maybe for the month, cause we still have the whole 31 days other than that,” he said.

“It’ll hurt us but it’s not going to be that detrimental that you know, it’s going to cause us to lose money this month or anything.”

Earl Travis owns Lannie’s Bar-B-Que #2. He says business at his restaurant usually gets a big boost during the Jubilee. And though he knows this year will be virtual — he’s still getting ready — just in case.