The victory capped an incredible season – that following Fyffe’s first Class 3A state football title December – over the same opponent. The Knights (21-6) and Red Devils (27-6) became the  first teams in AHSAA state history to play for the state titles in both sports in the same school year against each other. 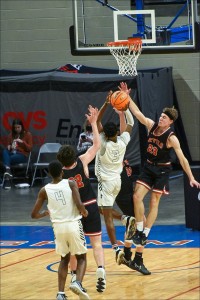 Godwin had a game-high 21 points, two assists, two steals and four rebounds to earn Class 3A state  tournament MVP honors for the Red Devils. His heroics also put him in some tall company. His mother (Jana Simmons) scored more than 3,000 points in her high school basketball career at Fyffe before moving the Jacksonville State where she played basketball and softball.

Dalton, who played in the Alabama-Mississippi All-Star Football Classic last December, muscled in 12 points in the win over Catholic and finished with a double-double hauling in 11 rebounds. He also blocked three shots. Micah Johnson also had 11 points and seven rebounds, and Michael Works scored only two points, but rebound and put-back basket at the end of the third quarter gave Fyffe a 31-27 lead heading into the fourth period.

Fyffe head coach Neal Thrash announced his retirement from coaching after the game. In 28  seasons, he has compiled a 559-261 overall head-coaching record.