Prattville Christian jumped out to a comfortable lead in the Class 3A girls’ basketball state tourney finals Friday, but then had to withstand a tremendous comeback effort by Sylvania to claim the Panthers’ first state championship with a 62-55 win.

The 3A girls’ finals tipped off Friday’s slate of championship finals at the 99th AHSAA State Basketball Championships being held at the Birmingham CrossPlex’s Bill Harris Arena. 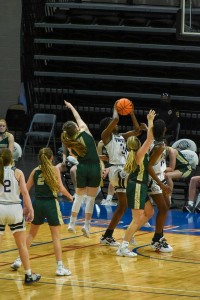 Prattville Christian (28-8) dominated play inside to build a 14-point lead midway through the third quarter. That’s when the Rams turned up the pressure, especially in the backcourt and began their comeback. With just over five minutes to play, however, the Panthers had opened a 12-point 50-38 lead. With 40 seconds left, the lead had  dwindled to five with PCA leading 56-51. That was as close as Sylvania could get.

The Panthers, coached by Jason Roberson, got strong inside play from sophomores CoCo Thomas and Class 3A state tourney MVP Hannah Jones. The duo turned in double-double performances with Thomas scoring 25 points and clearing 17 rebounds, and Jones, 16 points and 11 rebounds. She also had a double-double in the semifinals. Avery Rogers added eight points and Ella Jane Connell had four points and six assists.