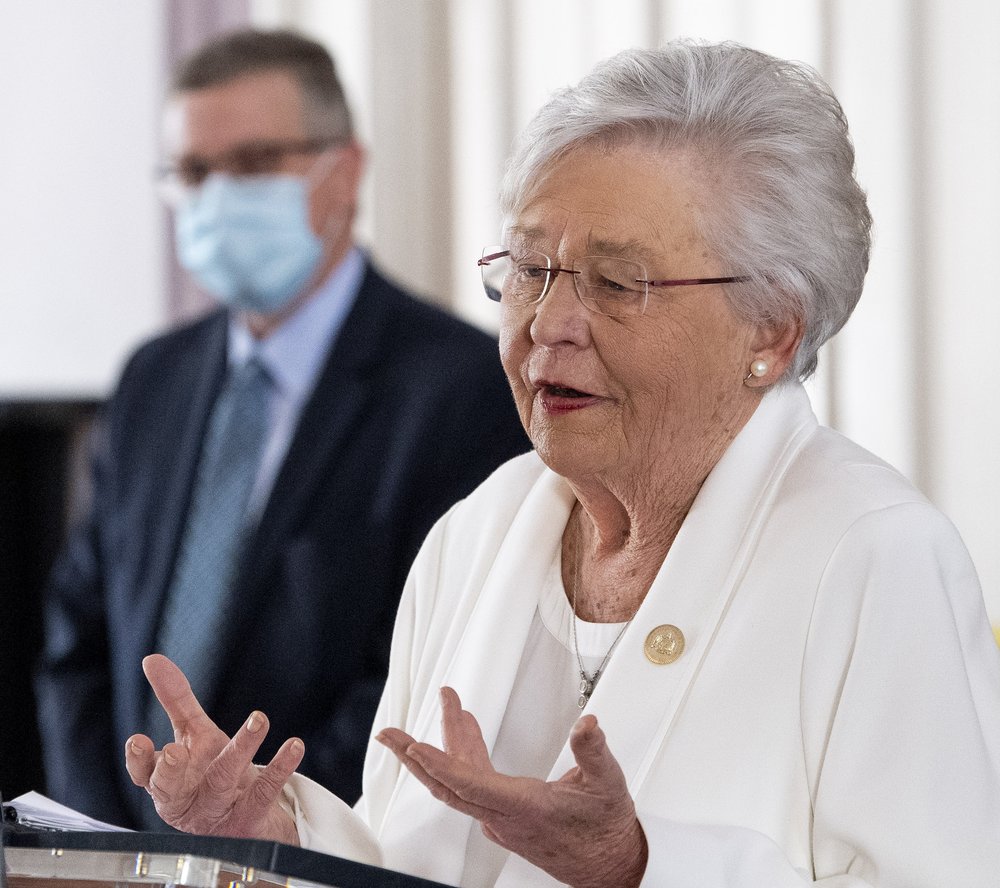 MONTGOMERY, Ala. (AP) — Alabama Gov. Kay Ivey has faced political pressure and angry constituents over her state’s mask order during the COVID-19 pandemic.

But the 76-year-old governor of the deeply red state has resisted calls to drop the requirement as Republican governors across the South either shunned mask mandates altogether or lifted them in late winter.

“Maybe they don’t have access to the same information I have. We want to be abundantly clear and abundantly safe before we drop the mask mandate,” Ivey said when asked about fellow Republicans — including the Alabama Senate and the lieutenant governor — who urged her to end the order.

Ivey issued Alabama’s mask order in July and announced on Thursday that she would extend it five more weeks until April 9.

“We need to get past Easter and hopefully allow more Alabamians to get their first shot before we take a step some other states have taken to remove the mask order altogether and lift other restrictions. Folks, we are not there yet, but goodness knows we’re getting closer,” Ivey said at a Thursday news conference.

“Mississippians don’t need handlers. As numbers drop, they can assess their choices and listen to experts. I guess I just think we should trust Americans, not insult them,” Gov. Tate Reeves responded on Twitter.

On social media, Ivey’s decision drew a mix of rage and gratitude.

“Meemaw you gotta go…. I ain’t wearing it and whoever runs against you in 2022 has got my vote,” one person tweeted at Ivey using the phrase for a Southern grandmother.

Another thanked her and wrote, “you are the only Southern governor doing the right thing.” A few questioned if a five-week extension was long enough.

In extending the order, Ivey threaded a political needle — following medical advice while letting people know a firm end date is in sight. The governor said wearing a mask will be a personal responsibility after the order expires.

“Let me be abundantly clear: After April 9, I will not keep the mask order in effect,” she said.

Early in the pandemic, the governor closed dine-in restaurants, beaches and nonessential businesses — all orders that have been lifted.

Alabama’s State Health Officer Scott Harris said he presented the governor with information and options, but she made the final decision.

“I really appreciate her being willing to do that. I understand it’s a very difficult decision for her. I think the science on masks is very clear that they prevent disease,” Harris said.

Dr. Michael Saag, an infectious disease specialist who contracted COVID-19 early in the pandemic and now treats patients with the illness, said Ivey deserves credit for standing up to calls to lift the order from fellow Republicans.

“I think it was a bold step forward considering the pressure she was under,” he said.

But rather than setting a firm deadline for the requirement to expire, Saag said, it would be better to see where both caseloads and vaccinations totals are next month and then make a decision. Comparing Alabama’s hospitalization trend with those from states that are lifting mask orders could be illuminating, he said.

“My only plea at this point is to keep an open mind, to watch the data,” Saag said. “Keep an eye on where Alabama is as compared to where Mississippi and Texas are.”

Ivey, known for her folksy demeanor, in December made a tongue-in-cheek quip about the heaping doses of criticism she has received from some over masks.

“Y’all, I’m not trying to be Governor Mee-Maw as some on social media have called me. I’m just trying to urge you to use the common sense the good Lord gave each of us to be smart and considerate of others,” she said.