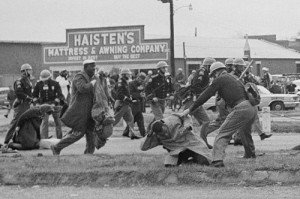 FILE – In this March 7, 1965, file photo, a state trooper swings a billy club at John Lewis, right foreground, chairman of the Student Nonviolent Coordinating Committee, to break up a civil rights voting march in Selma, Ala. (AP Photo/File)

The Martin & Coretta King Unity Breakfast in Selma is one of the few in-person events to mark the 56th anniversary of Bloody Sunday. It was March 7, 1965 that about 600 marchers were beaten by state troopers after crossing the Edmund Pettus Bridge to push for voting rights.

President Biden, who has been to Selma in person for previous remembrances, today delivered pre-recorded remarks to be played at the breakfast, which took place in the parking lot of Wallace Community College.

Here is the complete text of his remarks:

Good morning to everyone joining in this unity breakfast named after Dr. and Mrs. King and to  commemorate the anniversary of the march in Selma.

I know this is the first commemoration of Bloody Sunday without Reverend C.T. Vivian, Reverend Joseph Lowery, and Congressman John Lewis. Preachers of the social gospel. Architects of the ‘Beloved Community,’ they built not only with words but with action. And  reminders that in our lifetime, for Black Americans, the fundamental right to vote has been denied by white supremacy hiding both behind white hoods and in plain sight in state houses  and courtrooms. 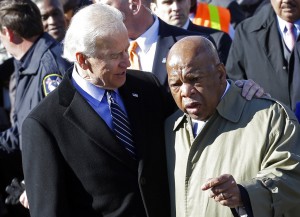 Yet those torches and burning crosses, the batons, tear gas, fire hoses, attack dogs, and unfair  laws and trials could not stop progress. The blood of John Lewis and hundreds of other brave  and righteous souls that was spilled in Selma, on this Sunday in 1965 sanctified a noble  struggle.

And when the country saw those images that night, America was forced to confront the denial of  democracy — the fierce urgency of justice.

The legacy of the march in Selma is that while nothing can stop a free people from exercising their most sacred power as a citizen, there are those who will do everything they can to take  that power away.

The Voting Rights Act began to dismantle barriers to voting and to make our elections more fair,  free, and representative.

I was always proud to lead the efforts to reauthorize it over the years as a U.S. Senator in the  Judiciary Committee. But at the same time, Republicans at every level have chipped away at it.

Then in 2013, the U.S. Supreme Court gutted the Voting Rights Act, holding that times have  changed and blatant voter discrimination was rare, contrary to the assault that was taking place on the ground. The late Justice Ginsburg wrote that the decision was like “throwing away your  umbrella in a rainstorm.” Today, we have a hail storm, not a rain storm.

And in 2020, our very democracy on the line, even in the midst of a pandemic, more Americans  voted than ever before. Multiple recounts in states and decisions in more than 60 courts – from  judges appointed by my predecessor, including at the Supreme Court – upheld the integrity of  this historic election.

Yet instead of celebrating this powerful demonstration of voting – we have seen an  unprecedented insurrection in our Capitol and a brutal attack on our democracy on January 6th. A never before seen effort to ignore, undermine, and undo the will of the people.

And to think that it’s been followed by an all-out assault on the right to vote in state legislatures all across the country happening right now. During the current legislative session, elected  officials in 43 states have already introduced more than 250 bills to make it harder for  Americans to vote. We cannot let them succeed.

Last week, the House of Representatives passed H.R. 1, the For the People Act of 2021. This is  a landmark piece of legislation that is urgently needed to protect the right to vote, the integrity of  our elections, and to repair and strengthen our democracy. I hope the Senate does its work so  that I can sign it into law.

Today, on the anniversary of Bloody Sunday, I am signing an executive order to make it easier  for eligible voters to register to vote and improve access to voting. Every eligible voter should be  able to vote and have that vote counted. If you have the best ideas, you have nothing to hide.  Let the people vote.

I’ll close with this – a few days before he passed, Jill and I spoke with John, Congressman  Lewis.

But instead of answering our concerns about him, “how are you doing, John,” he asked us to  stay focused on the work left undone to heal and to unite this nation around what it means to be  an American.

That’s the God’s truth. John wouldn’t talk about his pending death or his concerns. He said we  just got to get this done.

That we are all created equal. That we all deserve to be treated equally.

On this day of reflection, please, let’s stay focused on the work ahead.