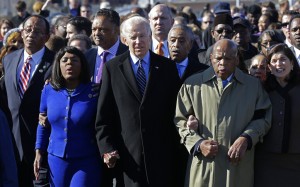 Today is the 56th anniversary of “Bloody Sunday” in Selma, when about 600 marchers hoping to improve voting rights were beaten by state troopers after crossing the Edmund Pettus Bridge.

To mark the anniversary, a new executive order from President Biden directs federal agencies to take a series of steps to promote voting access.

The order comes as congressional Democrats press for a sweeping voting and elections bill to counter efforts to restrict voting access.

This is a fact sheet from The White House regarding the executive order:

On this day in 1965, state troopers beat and tear-gassed hundreds of peaceful protestors crossing the Edmund Pettus Bridge in Selma, Alabama. The protestors were seeking justice and to ensure their right to vote would not be denied. At the head of the march were former Congressman John Lewis and Rev. Hosea Williams. As the troopers advanced with clubs raised, the group knelt in prayer. The images of protestors, bloody and bruised, flashing on television screens across the nation spurred Congress to pass, and President Johnson to sign into law, the 1965 Voting Rights Act. Congressman Lewis’ fight to protect and expand the vote did not end that day in Selma. He carried the mission to our nation’s Capital and remained a vigilant protector of our right to vote, knowing all too well the burdens borne to guarantee it.

Today, to mark the 56th anniversary of Selma with actions and not just words, President Biden will sign an Executive Order to promote voting access and allow all eligible Americans to participate in our democracy. This Executive Order will leverage the resources of the federal government to increase access to voter registration services and information about voting.

As the President has said, democracy doesn’t happen by accident. We have to defend, strengthen, and renew it. Free and fair elections that reflect the will of the American people must be protected and defended.  Too many Americans face significant obstacles to exercising their fundamental right to vote. For generations, Black voters and other voters of color have faced discriminatory policies that suppress their vote. Voters of color are more likely to face long lines at the polls and are disproportionately burdened by voter identification laws and limited opportunities to vote by mail. Native Americans likewise face limited opportunities to vote by mail and frequently lack sufficient polling places and voter registration opportunities near their homes. Limited access to language assistance is an obstacle for many voters.  People with disabilities face longstanding barriers in exercising their right to vote, especially when it comes to legally required accommodations to vote privately and independently. Members of our military serving overseas, as well as other American citizens living abroad, also face unnecessary challenges to exercising their right to vote.

Today’s Executive Order is an initial step in this Administration’s efforts to protect the right to vote and ensure all eligible citizens can freely participate in the electoral process. The President is committed to working with Congress to restore the Voting Rights Act and pass H.R. 1, the For the People Act, which includes bold reforms to make it more equitable and accessible for all Americans to exercise their fundamental right to vote.

Direct federal agencies to expand access to voter registration and election information. The executive order will direct the head of each federal agency to submit to the Assistant to the President for Domestic Policy a strategic plan outlining ways their agency can promote voter registration and participation within 200 days. These strategic plans could include actions such as:

And, the Federal Chief Information Officer of the United States will coordinate across federal agencies to improve or modernize federal websites and digital services that provide election and voting information to the American people, including ensuring that federal websites are accessible to individuals with disabilities and people with limited English proficiency.

Improve and modernize Vote.gov. The Executive Order will direct the General Services Administration (GSA) to submit to the Assistant to the President for Domestic Policy a strategic plan outlining steps to modernize and improve the user experience of the federal government’s premier source of voting-related information, Vote.gov, including the accessibility of the website within 200 days. The order requires GSA to seek the input of affected stakeholders, including election administrators, civil rights and disability rights activists, Tribal Nations, and nonprofit groups that study best practices for using technology to promote civic engagement.

Increase federal employees’ access to voting. The Executive Order will direct the Director of the Office of Personnel Management to work with the head of federal agencies to provide recommendations to the President regarding leave for federal employees to vote or to volunteer as nonpartisan poll workers, ensuring that the federal government serves as a model to other employers.

Analyze barriers to voting for people with disabilities.  The Executive Order will direct the National Institute of Standards and Technology (NIST) within the Department of Commerce to evaluate and publish recommendations on the steps needed to ensure that the online Federal Voter Registration Form is accessible to people with disabilities within 200 days.  The order directs NIST—in consultation with the Department of Justice, the Election Assistance Commission, and other agencies—to analyze barriers to private and independent voting for people with disabilities, including access to voter registration, voting technology, voting by mail, polling locations, and poll worker training.

Increase voting access for active duty military and other overseas voters.  The executive order will direct the Secretary of Defense within 200 days to establish procedures to annually offer each member of the Armed Forces on active duty the opportunity to register to vote in federal elections, update voter registration, or request an absentee ballot. Additionally, the Secretary of Defense—in coordination with the Department of State, the Military Postal Service Agency and United States Postal Service—is required to submit a strategic plan for an end-to-end ballot tracking system for overseas ballots. And, the head of each federal agency with overseas employees is directed to designate a point of contact to coordinate with the Federal Voting Assistance Program (FVAP) and promote voter registration and voting services available to these employees.