On Friday, February 23, 2021, Tawasaki Williams, 35, of Montgomery, was sentenced to 75 months (6 years 3 months) in prison for possession of a controlled substance with intent to distribute and possession of a firearm in furtherance of a drug trafficking crime, announced Acting U.S. Attorney Sandra J. Stewart. In addition to his prison sentence, Williams was ordered to serve three years of supervised release. There is no parole in the federal system. The sentence comes after Williams pleaded guilty to the charges in November of 2020. 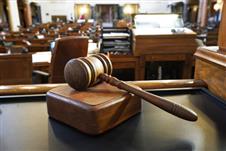 According to court documents, on February 21, 2020, officers with the Montgomery Police Department stopped a vehicle being driven by Williams. Once Williams was stopped, he was removed from the vehicle along with a 5-year-old girl who was sitting in the back seat. During the stop, a K9 unit conducted a free-air search around the vehicle and gave a positive alert, indicating narcotics were present in the car. Officers searched the vehicle and located a .45 caliber pistol under the driver’s seat and a substantial quantity of drugs, including powder cocaine and numerous hydrocodone pills. The cocaine, pills and approximately $2,400 in cash were found in the little girl’s book bag, which had been sitting next to her on the seat.

During a pat down of Williams, methamphetamine was found in his pocket.

When an arrest warrant was being executed on Williams at his home in July of 2020, he was slow to respond to officers knocking and announcing their presence. While officers were at the door, they could hear the sound of flushing or running water inside the home. When law enforcement entered to make the arrest, they found more guns and drugs. Multiple children were also present in the home.

Williams has multiple previous felony convictions and is prohibited from possessing a firearm.