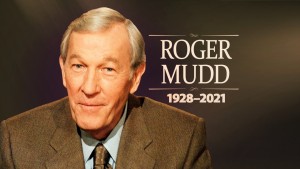 Longtime CBS and NBC correspondent and television anchor Roger Mudd has died at the age of 93. CBS News says Mudd died Tuesday of complications of kidney failure at his home in McLean, Virginia.

The journalist famously once stumped Sen. Edward Kennedy by simply asking why he wanted to be president.

He was also a frequent anchor and contributor to various specials.

His career coincided with the flowering of television news, when the big three networks and their powerhouse ranks of reporters were the main source of news for millions of Americans.