1 of 3 surviving Tuskegee Airmen in Arizona dies at 95 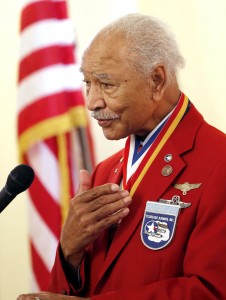 PHOENIX (AP) – One of three surviving members in Arizona of the famed all-Black Tuskegee Airmen has died.

The Archer-Ragsdale Chapter Tuskegee Airmen confirmed that Robert Ashby died Friday at his home in Sun City. He was 95.

Ashby enlisted at age 17 in the Army Air Corps, which later became the U.S. Air Force. He went to Tuskegee, Alabama, for aviation training in 1944 and later served in all-Black units.

Lt. Col. Ashby retired in 1965 and went on to be an airline pilot and flight instructor. Ashby is believed to be the first Black pilot with a major airline to reach mandatory retirement age.