People in Dallas County are now assessing the damage — caused by the powerful wave of storms — that ripped through the area Wednesday.

“Pretty much totaled our house.”

Jimbo Small is thanking God — that he and his wife weren’t killed or hurt when a tree came crashing down on their house during the storms.

“The rain was going sideways and my wife was in the bed and then I told her to get up cause I felt like a tornado was coming. Told her to get in the bathroom. And her and her little dog they got out of the bed. And wasn’t probably ten seconds, a tree fell through her bed and all the way through our house,” said Small. 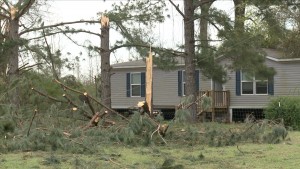 The destructive power of Mother Nature is on full display in Dallas County. About a two mile stretch of homes along Highway 14 in Burnsville — was hit especially hard.

“We had an opportunity to go and view the site, view the damage this morning. And it’s major damage that has been done,” said Probate Judge Jimmy Nunn.

EMA officials say a tornado touched down in the area — snapping trees and power poles — and causing extensive damage to several homes.

“The roof gone. Water leaking down through the ceiling. The furniture all messed up with water. Severe damage done to it,” Boyd said.

“My very first tornado, that I’ve ever experienced. And hope I never do again,” said Linda Caver.

“It was just on us before we knew it. And in less than 3 minutes it was gone.”

Crews continue to work to clean up after the storms — and restore power to homes without electricty.

EMA officials say about 300 homes in the county — remain without power.