Survey teams from the National Weather Service are working to confirm that tornadoes touched down in our area during the severe weather outbreak on Wednesday, March 17, and into the overnight hours of Thursday, March 18. So far, they have identified several tornadoes. The storms caused property damage but did not result in any fatalities.

Here is a rundown of their storm reports:

An EF-1 tornado with winds up to 90 mph touched down just northeast of Billingsley and was on the ground for nearly three miles. Its maximum width was 150 yards.

Elsewhere in Autauga County, An EF-0 tornado with peak winds of 70 mph touched down briefly in the Oak Grove area. It was on the ground for .13 miles and had a maximum width of 75 yards. The storm was south of White City along County Road 43 west of County Road 21. A metal outbuilding was destroyed, a carport was thrown into a field and trees and branches were snapped.

That’s where an unanchored home was shifted off of its foundation and a double-wide mobile home was destroyed. In addition some exterior walls of a brick home collapsed and outbuildings were damaged. Another home had roof damage and a vehicle was moved 15 feet. Other trees were snapped before the tornado dissipated as it crossed Chilton County Road 16 east of Pools Crossroads.

Also in Chilton County, An EF-1 tornado with winds up to 95 miles per hour touched down northwest of the Cooper community before lifting west of Higgins Ferry Park about three miles away. It had a maximum width of 500 yards. An off-duty NWS worker witnessed this tornado along Chilton County Road 484.

It mainly caused tree damage along county roads 491, 97 and 486. There was some damage to farm buildings. The tornado dissipated north of County Road 28.

An EF-2 tornado with peak winds up to 130 mph was on the ground for nearly 35 miles, starting in Wayne County, Mississippi, before crossing the Alabama state line. It had a maximum width of 400 yards. Two people were injured in this storm.

It crossed from Mississippi into southwest Choctaw County, where chicken houses were damaged on County Road 2 and trees were snapped or blown over. It headed toward Silas, causing spotty tree damage north of Highway 84 before strengthening. 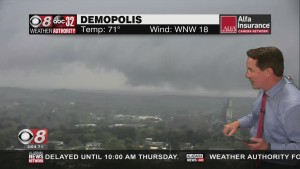 It  quickly strengthened and widened as it approached the Tombigbee River and entered northwest Clarke County, causing extensive tree damage from the Trotter Road area near the river to Campbell’s Landing Road to near the Marengo County line. A few camp houses had roof damage. Two people in a home had minor injuries. The tornado continued into Marengo County.

By then, it was rated an EF-1 with peak winds of 110 mph as it continued near Morvin. It snapped and uprooted trees before dissipating near Highway 69.

An EF-0 tornado with peak winds of 65 mph touched down in the Unity community. This tornado was on the ground for .13 miles and had a width of 25 yards. This storm hit around County Road 56, uprooting a pine tree and breaking branches off of nearby trees.

An EF-1 tornado with peak winds of 94 mph hit near Brantley shortly after 4 a.m. on Thursday, March 18 as the severe weather lingered into the overnight hours in South Alabama after ending in West and Central Alabama.

This tornado hit just northeast of Brantley with a maximum width of 150 yards. It was on the ground for about a half-mile. It touched down at the corner of Glenwood Road and Nelvin Wallace Road, where it snapped trees. It took off the roof of an out building before lifting just south of North Brunson Chapel Road.

An EF-2 tornado with peak winds of 115 mph formed northeast of the Edmund Pettus Bridge near Water Avenue just south of Alabama Highway 14 and remained on the ground to Burnsville. It began uprooting trees before growing stronger.

A home near Alabama Highway 14 and Dallas County Road 871 had structural damage, including roof damage, broken windows and the loss of a carport. An unanchored manufactured home next door was destroyed with its contents scattered over 100 yards. A vehicle at the home was rolled over. 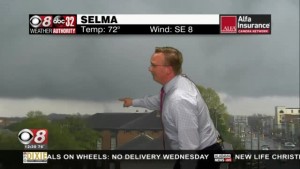 Several other homes to the northeast had damage. Two people crawled out of a manufactured home with minor injuries.

The tornado reached its widest point of nearly 1,000 yards. It lifted before reaching Dallas County Road 880.

Elsewhere in Dallas County, an EF-0 tornado with maximum winds of 65 mph was on the ground for about a mile in the Central Mills area of southwest Dallas County. It had a maximum width of 75 yards.

It touched down near State Highway 66 and east of Dallas County Road 109. There was minor tree damage reported.

An EF-1 tornado with winds up to 90 mph struck southwest of Sweet Water, remaining on the ground for about five minutes and nearly three miles. It touched down along County Road 6, reaching its maximum strength near County Road 7 before dissipating as it crossed Highway 10. Damage was limited to snapped trees.

A second tornado hit the Sweet Water area. This one was an EF-0 with maximum winds of 65 mph. It traveled 1.75 miles and had a maximum width of 75 yards. It began near Third Avenue in Sweet Water and continued north, crossing Highway 10. It dissipated near Beaver Creek Road. It broke large tree branches.

Another tornado struck near the Demopolis Lock and Dam. It was rated an EF-0 with peak winds of 80 mph. It was on the ground for .83 miles and had a maximum width of 175 yards. It crossed Lock and Dam Road just west of Foscue Park. Trees were uprooted, large tree branches were broken and some paneling was pulled off of a building next to Foscue Creek.

An EF-0 tornado with peak winds of 80 mph hit northwest of Pine Level at 10:43 p.m. Wednesday night. It had a maximum width of 140 yards and was on the ground for 0.3 miles. It touched down on the east side of U.S. Highway 231. Trees were uprooted in the front yard of a home, while a playhouse and trampoline were destroyed. A tree fell on the house. Other trees were uprooted or snapped before the tornado lifted in a pasture.