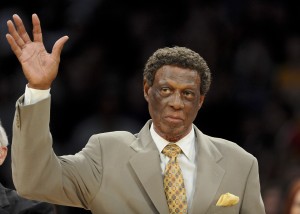 FILE – Elgin Baylor waves as he is honored along with other members of the 1974 Los Angeles Lakers Championship team, at half time of an NBA basketball game between the Houston Rockets and the Lakers in Los Angeles, in this Friday, April 6, 2012, filer photo. Elgin Baylor, the Lakers’ 11-time NBA All-Star, died Monday, March 22, 2021, of natural causes. He was 86. The Lakers announced that Baylor died in Los Angeles with his wife, Elaine, and daughter Krystal by his side. (AP Photo/Gus Ruelas, File)

Elgin Baylor, the Lakers’ 11-time NBA All-Star, has died. The Lakers said Monday that Baylor died of natural causes in Los Angeles with his wife and daughter by his side.

With a silky-smooth jumper and fluid athleticism, Baylor played a major role in revolutionizing basketball from a ground-bound sport into an aerial show. He was the first NBA player to surpass 70 points in a game. Lakers great Jerry West called him “one of the most spectacular shooters the world has ever seen.” Baylor’s second career as a personnel executive with the Los Angeles Clippers was much less successful.