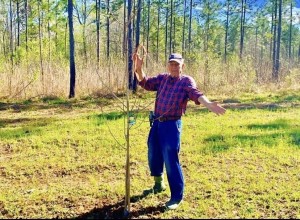 This week’s “Pay it Forward” honoree is 92-year-old Alva Stuckey from Wetumpka, who works hard to serve veterans in a suicide prevention program.

In 2009, Marine officer Lee Stuckey founded “AHERO” veterans program, which stands for America’s Heroes Enjoying Recreation Outdoors.
It was after he had struggled with his own issues returning from combat.

“After a real kinetic combat deployment I came back with a lot of combat issues and went to take my own life and mom actually called my cell phone and I was pulling the trigger,”said Lee Stuckey.

He says she saved his life and it was at that time he realized there were other veterans dealing with the same issues.
So he started AHERO program, a non-profit organization, which has served almost 9,300 veterans and stopped over 500 suicides by giving veterans the support they need.

There is a farm in Shorter, AL for the veterans to enjoy. Lee’s father, Alva, is the backbone of it, who is affectionately called “Pine cone.”

He helps clear the land, driving tractors, and picking up pine cones.

“Not only does he pick up pine cones, but he also coordinates and does fundraising for us. Every dollar, 100%, goes to supporting veterans,” said Lee.

And at 92-years-old, no one is slowing him down.

“God has blessed me in the fact that I can walk with the best of them. I can drive a tractor with whomever,” said Alva Stuckey.

“Alva, thank you for your work in helping veterans! We want to pay it forward to you $333! Happy birthday and keep up the great work!” said Stewart Vance of the Vance Law Firm.

Alva says it’s all going back to help our military veterans.

Whether it’s picking up pine cones or driving a tractor, he’ll do whatever it takes for the heroes that have given so much.

“‘Pine cone’ is out there making it all happen. He’s the glue that is holding it together,” said Lee.