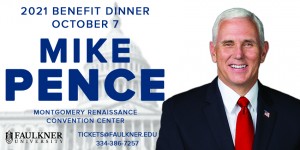 Faulkner University has announced that former Vice President Mike Pence will be the speaker at this year’s annual benefit dinner. The event will be held at the Renaissance Hotel and Convention Center in Montgomery on October 7.

“Vice President Mike Pence has had a storied career as a public servant,” Faulkner University President Mike Williams said. “He is also a man of deep Christian faith. He’s been an ardent advocate for liberty and most expressly religious liberty, the guiding force of our founding fathers who forged this republic. It’s on this foundation of religious liberty that Faulkner stands today.”

Williams says the benefit dinner is the signature yearly event at Faulkner University. It started more than 40 years ago and regularly draws nearly 2,000 guests. Previous speakers have included a president, a first lady, a prime minister and a U.S. ambassador along with journalists, athletes, coaches, comedians and astronauts to speak in Montgomery.

Pence became nationally known as vice president under President Trump. Before then he was elected to Congress in Indiana in 2000, then became that state’s governor in 2013.

Tickets to hear Pence speak are on sale now at https://www.faulkner.edu/pence. Proceeds from the dinner go to support the university, and student scholarships in particular.

Faulkner University is a private, Christian liberal arts university. In addition to its main campus in Montgomery, Faulkner operates extension campuses in Birmingham, Huntsville and Mobile along with online degree programs.