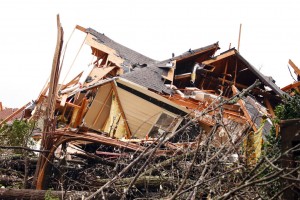 A house is destroyed after a tornado touched down south of Birmingham in the Eagle Point community Thursday, March 25, 2021. (AP Photo/Butch Dill)

Teams from the National Weather Service have started surveying the damage from the storms that hit Alabama on Thursday to determine whether they were caused by tornadoes, and if so, how strong they were.

So far, surveys by ground and by the air have confirmed a 34-mile tornado that was on the ground from near Helena in Shelby County to near Vandiver in Shelby County. This is south of Birmingham.

The damage from that storm shows the tornado was likely an EF-2 in Pelham and and EF-3 by the time it reached Eagle Point, near U.S. Highway 280.

The teams say EF-2 damage was found near Ohatchee in Calhoun County. That is north of Anniston. That is the tornado that killed five people.

EF-1 tornadoes have been confirmed in the Roebuck area of northeast Birmingham and in Southwest Pickens County, which is near the Mississippi state line west of Tuscaloosa County.

EF-1 tornado damage was found in southern Shelby County and far northwestern Chilton County. Ground surveys have not yet been done of damage in Hale, Perry and Bibb counties for the same storm.

This is the tornado scale: