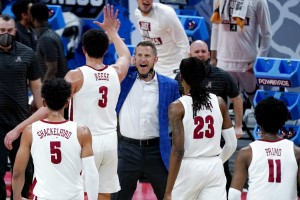 Alabama head coach Nate Oats congratulates players during the game against Maryland in the second round of the NCAA tournament. Alabama plays UCLA in the Sweet 16 tonight. (AP Photo/Mark Humphrey)

Number two seed Alabama (26-6) takes on No. 11 seed UCLA (20-9) tonight in the NCAA Tournament Sweet 16. With a victory, Alabama would advance to the Elite Eight for only the second time in school history.

Alabama earned a 96-77 win over Maryland in its most recent game, while UCLA walked away with a 67-47 blowout win against Abilene Christian in its last outing.

The Crimson Tide’s leaders are Herbert Jones and Jaden Shackelford. Jones has averaged 11.3 points and 6.5 rebounds while Shackelford has put up 14.3 points per game.

The Bruins have been led by sophomores Jaime Jaquez Jr. and Johnny Juzang. Jaquez is averaging 12.2 points and 6.1 rebounds while Juzang is putting up 12.5 points per game. Jaquez has connected on 40.2 percent of the 82 3-pointers he’s attempted and has made 5 of 8 over the last three games. He’s also converted 64 percent of his foul shots this season.

The game will be played at Hinkle Fieldhouse in Indianapolis Tipoff is at 6:15 p.m. CDT on TBS.