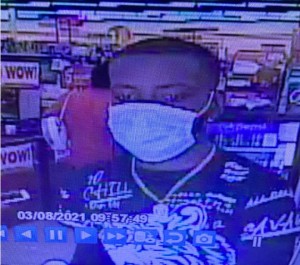 Montgomery County Sheriff’s deputies say they want to find a person wanted for fraud and unlawful breaking and entering of vehicles.

Investigators say the person used a stolen credit card on March 8. They say it was taken during a car break-in in Pike Road. The person then went to a pawn shop on North Burbank Drive in Montgomery and bought items with the stolen card, according to investigators.

They released a still shot from security video showing the male suspect inside of a store.  They say the person may also be wanted for questioning in other breaking and entering cases throughout the area.

If you have any information regarding the identity of this suspect or his whereabouts, call Central Alabama CrimeStoppers at (334) 215-STOP.