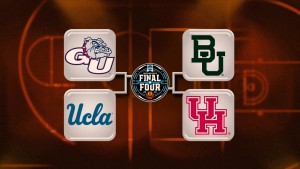 Gonzaga’s bid for a perfect season will continue into the Final Four of the NCAA men’s basketball tournament. Meanwhile, UCLA’s unexpected run through the tournament continues.

Drew Timme provided 15 of his 23 points while the Bulldogs outscored Southern Cal, 49-30 in the first half of an 85-66 win over the Trojans. Jalen Suggs just missed a triple-double for the 30-0 Zags, delivering 18 points, 10 rebounds and eight assists as Gonzaga captured the West Region.

All-American Corey Kispert had 18 points and eight boards on an “off” night, hitting just six of his 19 shots from the floor. Gonzaga still finished at 50% shooting despite Kispert’s struggles.

Isaiah Mobley delivered 19 points and seven rebounds for the Trojans, who finished the year 25-8.

UCLA survived a series of nail-biting misses by top-seeded Michigan in the closing seconds for a 51-49 victory that made the Bruins the fifth No. 11 seed ever to reach the Final Four. Sunday, UCLA knocked off Alabama in the Sweet 16.

Johnny Juzang poured in 28 points despite playing most of the second half on a sore ankle.

Tyger Campbell added 11 points for the Bruins, who will play Gonzaga in the national semifinals.

Franz Wagner missed a pair of 3-point attempts over the final 19 seconds, including one at the buzzer to bounce the top-seeded Wolverines from the tournament.

Hunter Dickinson had a team-high 11 points for Michigan, which shot 39% overall and was 3-for-11 from beyond the arc.

The winners of those games will play for the National Championship Monday night at 8PM CDT.