SAN ANTONIO (AP) — Aari McDonald’s small shoulders carried Arizona through a rebuilding project to the brink of a national championship. Her last second shot couldn’t carry the Wildcats to the title as they fell 54-53 to Stanford in the final. But the program that has been routinely overlooked and was on the bottom of the Pac-12 just four years ago has served notice there is a new power out West to be reckoned with nationally going forward. 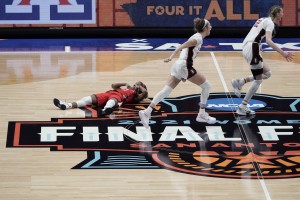 Arizona guard Aari McDonald, left, lies on the court after missing a shot at the end of the championship game against Stanford in the women’s Final Four NCAA college basketball tournament, Sunday, April 4, 2021, at the Alamodome in San Antonio. Stanford won 54-53. (AP Photo/Morry Gash)