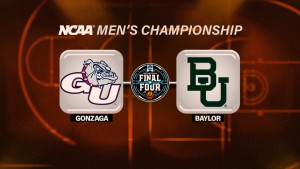 Gonzaga hopes to keep its undefeated 31-0 season intact when it faces Baylor (27-2) on Monday night for the NCAA Men’s Basketball National Championship. Both are No. 1 seeds in the tournament.

The game will be played at Lucas Oil Stadium in Indianapolis at 7:20 p.m. CDT on CBS 8.

Gonzaga earned a 93-90 overtime win over UCLA in its Final Four game, while Baylor won easily 78-59 against Houston.

Here’s a look at how the teams stack up against each other:

SPARKING THE OFFENSE: Mitchell has either made or assisted on 42 percent of all Baylor field goals over the last three games. The junior guard has accounted for 17 field goals and 19 assists in those games.

THREAT FROM DISTANCE: Gonzaga’s Kispert has attempted 200 3-pointers and connected on 44.5 percent of them, and is 17 of 38 over the last five games.

STINGY DEFENSE: Baylor has forced opponents into committing turnovers on 24.8 percent of all possessions this year, the eighth-highest rate among all Division I teams.