The historic Confederate monument stolen from a Selma cemetery has been recovered more than 300 miles away in New Orleans. 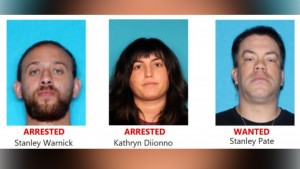 “At this time we are still coordinating with New Orleans to see was these the actual people that came and stole the chair. But they have been charged with being in possession of stolen property in New Orleans,” said Sgt Ray Blanks.

Blanks says authorities got an anonymous tip about the location of the chair earlier this week — and contacted New Orleans PD.

“After they recovered the chair they had enough probable cause to execute a warrant,” Blanks said.

“The laws are going to be enforced,” said DA Michael Jackson.

“I’m the district attorney for everybody. Republican. Democrat. Black. White. Asian. Everybody. So, these couple of defendants are possibly facing a theft-first charge and also possibly extortion. And maybe some other charges.”

“The chair would have been too heavy for one person to have lifted that chair and got it out the graveyard. It had to be more than one person,” said Jackson.

The Jefferson Davis Memorial chair is the property of the United Daughters of the Confederacy — Selma Chapter 53.