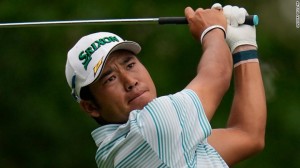 Hideki Matsuyama, of Japan, tees off on the fourth hole during the third round of the Masters golf tournament on Saturday, April 10, 2021, in Augusta, Ga. (AP Photo/Gregory Bull)

Hideki Matsuyama went into the final hole of the Masters with a two-stroke lead and poised to become the first male player from Japan to win one of golf’s major championships.

Matsuyama gave his challengers a bit of hope by skipping one into the water at No. 15, leading to a bogey that reduced his lead to two shots over Xander Schauffele.

But Schauffele found the water at 16, leading to the first triple-bogey of his major championship career.

Matsuyama won golf’s most prestigious tournament at 11 under par.