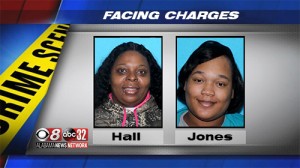 UPDATE: The Dallas County Sheriff’s Office and CrimeStoppers say the women have turned themselves in, shortly after leaving a credit union in Selma this afternoon.

The Dallas County Sheriff’s Office is searching for two women wanted on several charges. They say the women are armed and dangerous.

Deputies say JohnDakita Hall and Jameria Jones are wanted on two counts of attempted murder, firing a gun into an occupied vehicle, attempted kidnapping and robbery.

Investigators say on Wednesday, April 7, around 10:30 p.m. Jones drove Hall to a person’s home. That’s where they say Hall fired a gun several times at the victim, hitting the victim’s car and home.

The victim ran inside a convenience store to call police. Investigators say Hall went into the store and took the store phone away. They say Hall then tried to force the victim inside the vehicle that she and Jones were in.

If you have any information regarding the whereabouts of JohnDakita Hall and Jameria Jones, call Central Alabama CrimeStoppers at (334) 215-STOP.

Here are their descriptions:

Officer Convicted of Murder Still gets Paid in Huntsville