Efforts to fix long-standing waste water and sewer problems in the city of Uniontown — continue to frustrate residents and city officials alike.

The project to fix the problems is making progress — but it’s not without problems of its own.

Mayor Chris Jones says one of the problems — is the pace of the progress.

“They had the funding for three years and have not gotten to the process of doing anything as far as doing work,” he said. 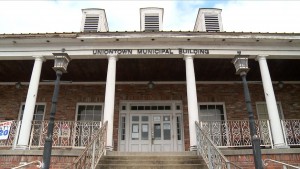 Uniontown has had waste water and sewage system problems for decades. And patchwork solutions over the years have done nothing to fix the problems.

“The sewage has been running into the creeks all the way down the Alabama River,” said Carlene James.

The old spray field treatment system was designed in the 70’s for a town of less than a thousand people. Right now about 3000 people are using the system.

“We deserve to know what’s going on,” said James.

Communication about the project — between the city — the water board — USDA — and residents — is another problem.

“We’ll hear bits and pieces. And the ones that’s in leadership are not coming together and talking about these issues in a way that we can really understand what going on in our city,” James said.

“But in doing so, we want to make sure that our citizens are considered in this process.”

Jones also has concerns about a possible rate increase — once the project is finished.