Breaking Overnight: 8 Dead in Shooting at FedEx Facility in Indianapolis 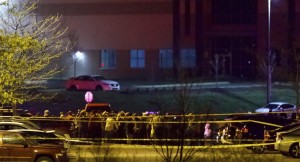 INDIANAPOLIS (AP) — Eight people were shot and killed in a late-night shooting at a FedEx facility in Indianapolis, and the shooter killed himself, police said.

Several other people were injured Thursday night when gunfire erupted at the facility near the Indianapolis International Airport, police spokesperson Genae Cook said.

At least four were hospitalized, including one person with critical injuries. Another two people were treated and released at the scene, Cook said.

The shooter wasn’t immediately identified, and investigators were in the process of conducting interviews and gathering information. Cook said it was too early to tell whether the shooter was an employee at the facility.

It was the latest in a recent string of mass shootings across the U.S. Last month, eight people were fatally shot at massage businesses across the Atlanta area, and 10 died in gunfire at a supermarket in Boulder, Colorado.