The three suspects in a shooting in Marion — are indicted by a Perry County grand jury.

“Attempted murder charges, conspiracy to commit murder, shooting into occupied buildings, you name it, there are charges everywhere,” said Jackson. 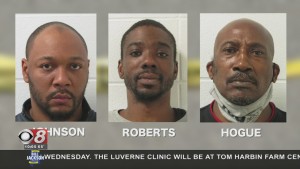 “They came to Marion, it appears for a particular reason. That’s to do bodily harm to some people.”

The trio is accused of shooting a man on the 200 block of Booker Street last week — in addition to one of his relatives.

“They came down and shot at least one person. And then they shot at another person, a female, who used her car to ram them and try to keep them from getting away. They fired shots at her too.” said Jackson.

The trio will be arraigned in circuit court in the next couple of months.

They’re all being held in the Perry County Jail — under a million dollar bond each.