A house fire in Selma leaves one person dead — and a family without a home.

Sixty year old Virginia Minniefield and her family are now homeless — after their home on the 800 block of Short Griffin Avenue was destroyed by fire early Saturday morning. 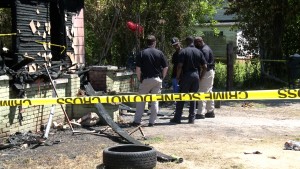 Interim Selma Fire Chief Gabriel Sharpe says two people made it out of the burning house alive — and one person died in the fire.

“Everything I ever had in life, I lost it. I lost a grandson. I’m suffering behind all of this. My right eye is burnt and just hurt so bad,” said Minniefield.

Meanwhile, fire investigators are working to determine exactly what caused the fire. And at this point in the investigation — they haven’t ruled out foul play.

“Right now they got to find out if arson was involved,” said Sharpe.

“And if that was, and if that’s the case, then it will turn into a murder investigation.”

The State Fire Marshal’s Office is helping Selma Fire investigators with the investigation.