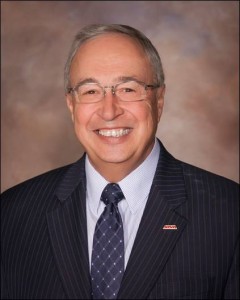 Alabama High School Athletic Association Executive Director Steve Savarese has announced plans to retire from the position he has held for the last 15 years. He made the announcement at today’s annual Central Board of Control spring meeting.

His retirement will be effective July 1.

Savarese did agree to remain on the job until his replacement has been hired and has had time to adjust to the position.

He currently serves on the National Federation of High School Associations’ Board of Directors, was selected as the president-elect of that board for the 2021-22 school year and is serving as the chairman of the NFHS Network Board of Directors.

He said his 47 years as an educator has been a long and very positive journey.

“It’s now time for me to devote my time to my family,” he said. “I’ve had an awesome time, teaching, coaching, serving as an administrator, and most humbly serving as the Executive Director of the AHSAA. To follow icons such as Cliff Harper, Bubba Scott and Dan Washburn has been the greatest honor of my life.”

Central Board President Van Phillips admits his board faces a very difficult task ahead.

“We think Steve Savarese is the best at his position in the nation,” Phillips said. “But we will do our due diligence to find his replacement. The Central Board will begin immediately its search for the next executive director.”

Savarese’s tenure includes the introduction of the AHSAA’s widely acclaimed Revenue Share initiative that has provided more than $16,000,000 back to the member schools since 2010.

Savarese also moved the Super 7 Football Championships to a rotating schedule between the University of Alabama’s Bryant-Denny Stadium and Auburn University’s Jordan-Hare Stadium by bringing the cities of Tuscaloosa/Northport and Auburn/Opelika together.

Hot and Getting Hotter