Bishop Stringer, who was tied for the lead heading into the final round, finished tied for third overall and earned All-SWAC honors with 10-over (226) following a final round 84. Stringer also earned Freshman of the Year honors after finishing as the low freshman in the tournament. He was joined with All-SWAC honors (second team) by Thacher Neal at 13-over (229) in seventh, and by Afnan Chowdhury who finished tied for ninth with 14-over (230).

Noel Sims finished 11th overall with a 15-over (231) with a final round 75, while Thomas Caddell finished 17th overall.

Lorenzo Elbert, Jr. of Prairie View A&M finished as the low medalist with a 3-under (231) following a final round 1-under (71). Joshua McCray of UAPB finished second with an 8-over (224), while Devansh Chadha of Texas Southern tied with Stringer at third with a total of 10-over (226). 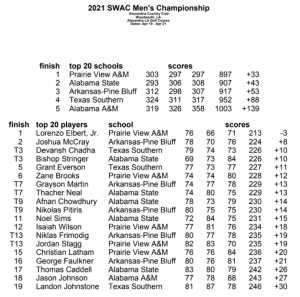