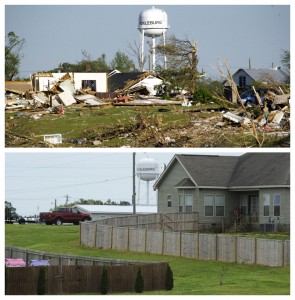 This combination of April 29, 2011 and April 16, 2021 photos shows a water tower in Hackleburg, Ala., on April 29, 2011, after a tornado destroyed much of the city and the scene a decade later. While some homes have been rebuilt and businesses recovered, the city still lacks adequate housing and retail businesses. (AP Photo/Rogelio V. Solis, Jay Reeves)

BIRMINGHAM, Ala. (AP) – Alabama is marking the 10th anniversary of a horrific tornado outbreak that killed more than 250 people statewide. Tuesday marks a decade since more than 60 twisters ripped across the state on April 27, 2011.

Alabama Gov. Kay Ivey has ordered flags to be lowered to half-staff. She also proclaimed a “Day of Remembrance” for what she called a “horrible event that has impacted the state of Alabama forever.” Cities including Tuscaloosa will hold events to commemorate the day.

Alabama was hardest hit among several states where tornadoes killed more than 320 people over four days. The storms caused an estimated $12 billion in damage.